Is that a wolf in the vines? 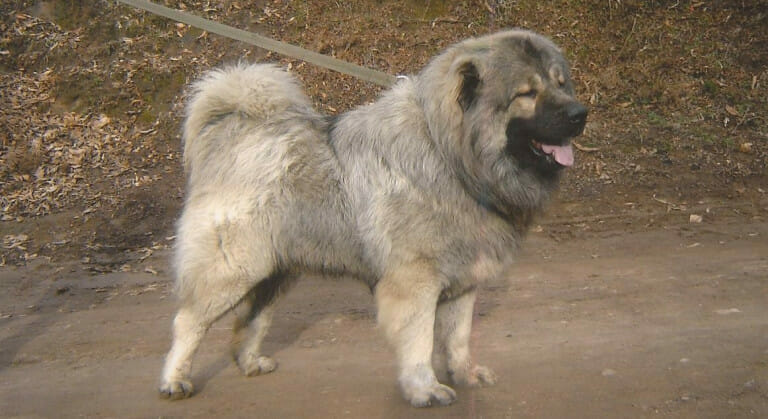 Caucasian Shepherd dogs guarding Georgia’s wineries make a trip to wine country unlike any other.

At the peak of the Gombori mountain pass, travelers find a little hut shrouded in cloud or birdsong, depending on the time of year. For many wine-questing visitors to Kakheti, this coffee house, high above the cloud line, is their first introduction to the rural Georgia which kept the country’s ancient wine making traditions alive through years of Soviet rule.

Alongside the clutches of friendly, chain-smoking, coffee-swilling Georgians, visitors may also notice another feature which renders a visit to Georgian wine-country quite unlike any other. There are dogs. Mythically huge, wolf-like dogs – everywhere.

The mountainous region of the Caucasus, straddling the land between the Black and Caspian seas, is home to one of the oldest living Molosser breeds: the Caucasian Shepherd or Mountain Dog. The original purpose of this vast breed was to protect livestock from bears, wolves and thieves and they’re still commonly used as guard dogs across Georgia. Bear-like in stature themselves, these Caucasian Shepherd dogs are tough enough to live outside with some shelter, and strays are proliferate.

One of the most alarming aspects of their appearance to Western visitors isn’t their Game of Thrones ‘direwolf’ like proportions, but the fact that most dogs are missing their ears and tails. While it makes them look alarming, it has a humane motive. The vast majority of dogs have them docked to prevent them being torn off by wolves or bears in the vicinity.

Despite their fierce appearance, Caucasian Shepherd dogs can also be surprisingly gentle and loyal to their masters. They’re also a thrilling sight for visitors, underscoring the ‘otherness’ of the Georgian wine scene which is key to its international emotive appeal.

So next time you’re in Georgia, keep your eyes peeled for these guardians of the grapes.