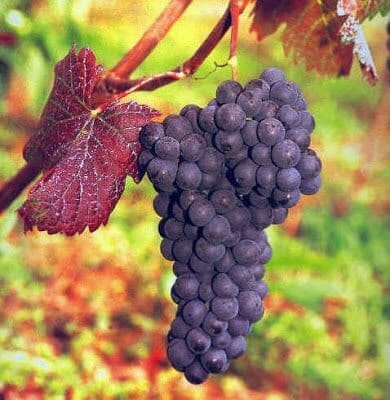 Literally, the “grape with no name,” Usakhelouri is indigenous to western Georgia. Early 20th century historian Javakhishvili noted it was name for a village of the same name that was located on the right bank of the Lakanuri River in Lechkhumi. It is also known by the name Okureshuli, for a different small village (also in Lechkhumi). Some of the vine’s characteristics – very small berries, unequal berry size, uneven ripening, have led some to theorize that the vine is similar to the wild vines of the area. Most plantings of Usakhelouri remain in Lechkhumi, though there have been recent plantings in Kakheti. Usakhelouri vines in Imereti were largely grubbed up in the late Soviet period.

Usakhelouri produces best on loamy, calcareous hillsides such as those in Racha-Lechkhumi. The leaves typically have three distinct lobes. Bunches are medium-sized and dense, more cylindrical than conical, occasionally winged. Berries are round and black but with a bloom that imparts a violet tinge. It buds early (in Racha-Lechkhumi, in the first ten days of April) and ripens relatively late (in the end of September). The grape skin is thin and detaches easily the flesh, but is highly susceptible to fungal diseases.

Usakhelouri currently is produced both in Qvevri and in neutral open-top containers, with no new wood maturation. The latter method generates a vibrant, high-toned nose of lilacs, violets, mint and pepper; the palate is similarly high-toned and peppery with very lively acidity, and light tannins.

Brought back from the edge of extinction: Jani
August 1, 2020
Check it Out
Go to Top
Posting....