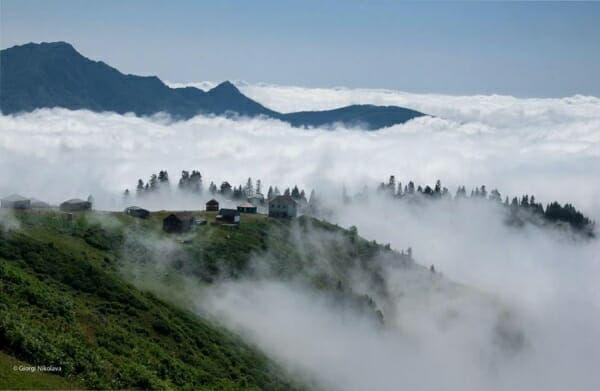 Chkhaveri is a rare but fascinating grape. It was originally a “maghlari” vine, trained to grow up trees, and was described in Ampelography of Georgia as ‘light and pleasant’. Published in 1960, this book is considered one of the most influential books in Georgian winemaking – though nowadays winemakers think such an interpretation of Chkhaveri is not sufficient.

Chkhaveri hails from Western Georgia. It’s mostly planted near the Black Sea in Adjara and Guria, but also in Imereti.The grape ripens quite late – in Guria it doesn’t ripen until late November! Consequently, botrytis is always a risk. Chkhaveri can reach very high sugar levels, but also has wonderfully fresh, brisk acidity and moderate alcohol levels, which makes the grape remarkably versatile.

Typically, Chkhaveri wines are vibrant pink. These covetable rosés have aromas of red berries, cherries, forest fruit and baking spice. They’re naturally semi-sweet thanks to the grape’s high sugar levels, and are usually produced in tanks. The wines are intended to be consumed immediately – they’re geared to be delightfully refreshing. Just the thing for a Georgian summer! But Chkhaveri also makes a lovely light red when fermented in Qvevri. Though the fruity character is more subdued, the Qvevri treatment enhances the grape’s spiciness, giving nice complexity to the wines.

Sadly, no examples of rosé Chkhaveri are available in the UK. But you can try a delicious example of Chkhaveri red from Taste of Georgia.