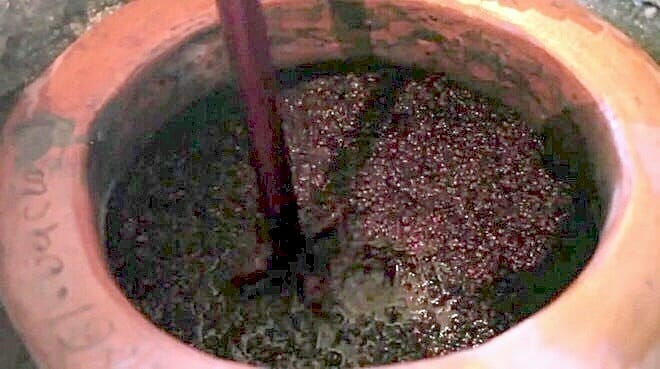 Georgian Qvevri are egg-shaped clay vessels used for millennia to make wine. Designated by Unesco as Intangible Cultural Heritage, Qvevri are treasured by Georgians as a living link to their long vocation as winemakers, as a symbol of resilience and identity, and as tools in making their most distinctive wines.

While ‘amphora wine’ is increasingly common as a term for wines made in clay, calling a qvevri an ‘amphora’ will have you corrected by a Georgian. (Quite sharply: they revere them.) Amphorae were the shopping bags of the ancient world: portable and designed for transportation. Qvevri hold more craft, intent and significance. They are original wine engineering: designed using (probably) empirical science to craft stable, balanced, and delicious wine.

The craftsmanship of making Qvevri is compelling. Soil is dug from sites whose suitability has been established over time. This fresh soil is seasoned outside, and filtered to remove stones, sticks and leaves, and milled fine when the clay texture shows itself. There are seasons to making qvevri as there are seasons to growing vines. The soil is dug and seasoned in winter, after the grape harvest is in. The qvevri is formed by successive circles of clay smoothed over each other. Imagine a sausage pot, transcendent. It is skilled work, held and passed through the generations of a handful of families. It is long work: each layer must dry before the next is added. A maker works several qvevri at once, inching them up to completion through the cool, damp winter. Once formed, qvevri are fired in kilns at around 1,000 degrees. Fired by wood, these kilns are cooler than their modern ceramic counterparts, which makes the finished qvevri more porous than comparable clay vessels from Spain or Italy. The maker judges the progress and readiness of the fire by the sound of its crackle. (There is no dial.) Typically, qvevri are lined with beeswax before use to reduce permeability. They may also be outer coated in lime wash, or lime cement for more stability. They are transported (carefully) to the marani (cellar), where they are installed in the ground as a permanent fixture. The arrival of a new qvevri is marked by joy, and celebration. These vessels have been made to be buried, yet they are often decorated as an expression of their significance.

What winemaking problems do Qvevri solve?

Part 2 of Qvevri myth-busting is coming in December.