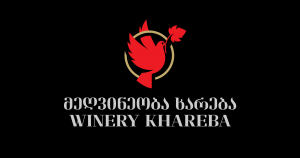 Khareba is a large and commercially significant Georgian wine producer with an aristocratic origin. As long ago as the 17th century, wines from its vineyards in Vachnadzeani, in Hereti, were championed by the noble Jandieri and the Vachnadze families. The following period, however, brought conflict and rule by the Persians, and destruction of vineyards and the winery. In 1877, it was rebuilt by descendants of the Jandieris, and it was rescued again more recently after the fall of the Soviet union. Today, reflecting the  contributions of Merle Antoine Mossano and Gogi Dakishvili, the annual production of three million bottles includes examples of the local Tsitska, Krakhulna, Mtsvane, Khikhvi, Kisi, Tsolikouri, Rkatsiteli, Usakhelouri and Saperavi grapes, as well as Otskhanuri Sapere and Aladasturi, and some Cabernet Sauvignon and Merlot. Now under the technical direction of talented young enologist Vladimer Kublashvili, Khareba’s award-winning wines are made using both qvevri and modern techniques. Their premium range, which has gone from strength to strength under Kublashvili’s direction, is made in a separate facility in the cool, high western province of Imereti. Kublashvili, along with many of Georgia’s new generation of leading winemakers, is passionate about bringing Georgia’s lesser-planted but historical native varieties back into commercial production, Khareba’s Otskhanuri Sapere is a star of the range. As recently as 2004, it was estimated that there were only five hectares of this once-common Imeretian grape in commercial production in the whole of Georgia. Otskhanuri Sapere is still a relative rarity, but enjoying a renaissance thanks to Khareba and fellow visionary wineries such as Teliani Valley and Lagvinari. This richly textured and brightly aromatic, savoury red is full of vivacious personality, and has superb potential for food pairing.

In 2011, Khareba completed the renovation of one of the most remarkable cellar complexes of Georgia – a 7.7km network of storage tunnels carved into the bedrock of Caucasus Mountains in Kvareli, first opened for the OIV congress in 1962. A restaurant, featuring a traditional bread oven and grill, was opened, as well as a fishing lake (stocked with trout), and a working water mill and old wine press. It is now one of the most popular enotourism destinations of Georgia.