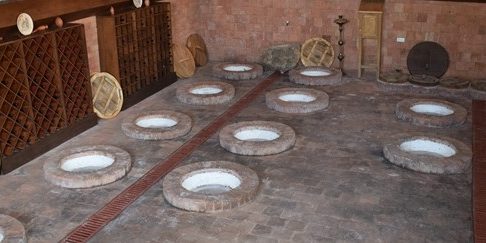 IWSC Importer of the Year 2018, and highly respected premium on- and off-trade supplier, Hallgarten & Novum’s move to include Georgian wines in their portfolio represents a major cultural shift for Georgia’s international wine making reputation.

Steve Daniel, Head of Buying at Hallgarten & Novum Wines was a guest of Wines of Georgia on a press and trade trip in 2018. His evident fascination with the wines of the former Soviet Republics was infectious to all those on the trip and we are thrilled to see a trade behemoth such as Hallgarten taking steps to shift the perception of Georgian wine from esoteric to mainstream.

“The wines from Armenia and Georgia have always fascinated me and I am thrilled to be able to introduce wines from two countries that have so much history. Each of the producers we have introduced utilise the country’s indigenous grape varieties, their unique terroir and a combination of modern and ancient winemaking techniques that result in wines of epic proportion.”

From Georgia, Hallgarten has introduced seven wines from the country’s largest wine producer, Vachnadziani, including two which are fermented in traditional qvevri.

Established in 1953, Vachnadziani is one of the oldest wineries in Georgia. During the Soviet years the vineyard fell into disrepair, but now the vineyards and cellars have been reinvigorated with the aim of balancing the ancient wine culture of Georgia with the cutting edge technology required to make world-class wines. Vachnadziani has over 1,000 hectares of vineyard, covering the Kakheti region in eastern Georgia and the Imereti, Racha and Lechkhumi regions in western Georgia. Across these vineyards Vachnadziani cultivates 25 vine varieties – the vast majority of which are indigenous.