As Georgian wines become more available and visible in the UK, the time is now for this series of short posts giving you the essentials on the grapes, growers and places behind this thrilling emerging wine producer.

We’re starting off with Grape Varieties of Georgia. Don’t be afraid. These unfamiliar creatures are friendly and very easy to like – if not necessarily easy to say. But just remember that Georgian in pronounced just as the word is written. Yes, it can look like an intimidating number of consonants, but don’t worry. Sip on that glass of Georgian and just have a go.

Georgian grape names are nearly always descriptive of their appearance or flavour, reflecting the historic widespread viticulture of the country. Georgia has at least 500 native varieties, but most were almost wiped out during Soviet times, when consolidation and efficiency replaced the naturally diverse, regional and individualistic Georgian wine culture. Today, around 60 varieties are commercially produced, but the Georgian government is on a mission to save and reintroduce the old grapes. Back in summer 2014, the National Wine Agency started by giving over 7000 plants of ‘obscure’ varieties to growers around the region, and this had steadily increased over subsequent years. Today, more and more of the grape varieties we include in this series are back in business, and imported into the UK. 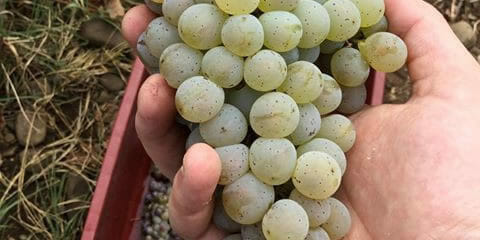 This name means “green Kakheti,” and is usually called simply “Mtsvane” (Green). Mtsvane Kakhuri is one of six different Mtsvane that grow throughout Georgia, each with a different DNA fingerprint, and each named for the origin of its growth. Older than Rkatsiteli, Mtsvane Kakhuri’s five-lobed leaves are dark green and funneled; the medium-sized bunches can be quite dense, sometimes with one shoulder and medium-sized berries.

The variety buds late, usually in late April and matures in the mid-season, in the last two weeks of September, before Rkatsiteli. It is an easy bunch to pick. It accumulates sugar easily yet retains high acidity levels, hence its suitability for sweet, fortified wines. Yields are good, it is hardy to winter frosts, and is prized for its ability to show the nuance of site. It is sensitive to disease and needs attentive viticulture. Mtsvane Kakhuri grows well on the calcareous soils of Kakheti, particularly in the appellations of Tsinandali, Manavi, Gurdjaani, Vazisubani and Kardenakhi.

When vinified in a European style, the young dry, white wine often has a greenish- straw tinge. Mtsvane Kakhuri imparts fresh white peach, floral, citrus and tropical aromas, with a light mineral undertone. It is quite dark and will show more apricot and stone fruit character when vinified in Qvevri. An aromatic variety, it oxidizes easily, and unless vinified in Qvevri, it requires sensitive anaerobic handling. Alternatively, it may be blended with a percentage of Kisi or Rkatsiteli; Mtsvane Kakhuri adds aromatic high tones and complexity, the other varieties inhibit oxidation.

Mtsvane Kakhuri is a solo performer in the PDO Manavi, a dry white wine from the region of the same name in Kakheti. Up to 20% of Mtsvane Kakhuri may be blended with Rkatsiteli for the classic Tsinandali PDO. Mtsvane Kakhuri also may have a small part in fortified wines such as Kardenakhi.

We have some delicious Mtsvane Kakhuri on show at our upcoming Trade Tasting on the 25th March from producers such as the big, and brilliant, Kakhuri Gvinis Marani and artisan specialists such as Dano Winery.