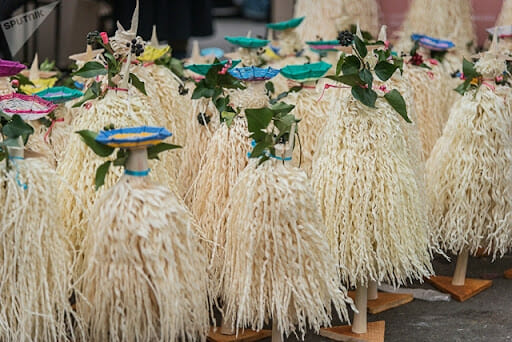 In Georgia, Christmas is celebrated on January 7th. As a predominately Georgian Orthodox country, they follow the old Julian calendar – and have some distinctly Georgian traditions.

On Christmas Day, many Georgians will join in Alilo, a parade through the streets. Thousands of people join in Alilo – the clergy of different churches, parishioners and children wearing the Stikari, a gold, white or red robe worn by a priest’s assistant. They carry crosses and icons through the streets and collect food, sweets and other things which are later distributed to the people in need and orphanages.

But Georgian children don’t have to wait all the way until January 7th for their presents! They’re traditionally exchanged on New Year’s Eve. But presents aren’t delivered by Father Christmas. They’re brought by Tolvis Papa – Grandfather Snow – who descends from the mountains wearing all white including a thick sheepskin cloak and hat called a nabadi. Just as western children leave out cookies and milk for Santa, Georgian children leave Tolvis Papa churchkela, a delicious sausage-shaped treat made of walnuts and grape juice.

Georgians even make Christmas trees distinctly their own. Chichilaki are made from dried hazelnut or walnut tree branches which are shaved to form small ‘trees’. Georgians believe that the shaved tree resembles the beard of St Basil the Great who visits Georgia at this time of year – similarly to Father Christmas and Tolvis Papa. It’s also believed that these trees symbolise hope and belief and they’re very popular at Christmastime, decorated with berries and other fruits.

Given how important sharing food and drink is to Georgians it should also come as no surprise that Georgians even have a special type of khachapuri specifically baked for Christmas. It’s called Guruli Gvezeli and is just like a typical khachapuri plus but also has a boiled egg hidden inside the dough.

As with everything, Georgians make Christmas distinctly their own. It’s a very special time of year – and a great time to visit.

Join our Georgian Wine Festival this December
November 16, 2021
Check it Out
Go to Top
Posting....