Georgia, Behind the Label 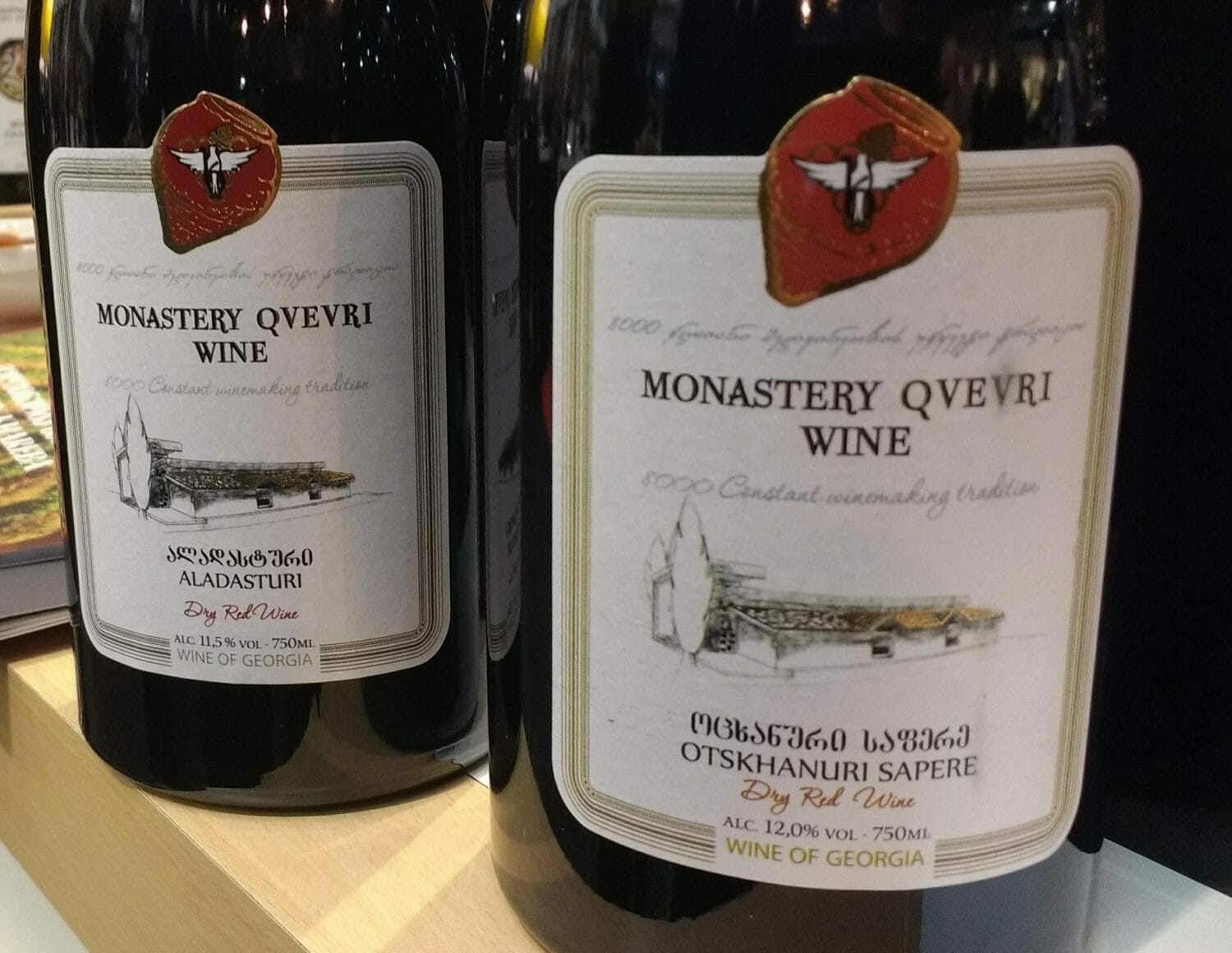 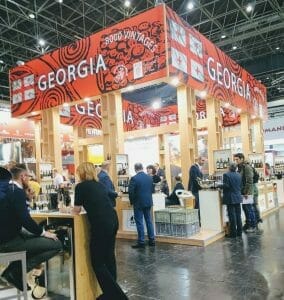 The Georgian stand at ProWein

It is far from easy to stand out among the thousands of stands spread across the 10 halls covering 71,000 square metres at the annual ProWein fair in Dusseldorf, but there is no question that this is precisely what Georgia achieved this year with its presence in Hall 15.

Over 20 producers of varying sizes and histories all made the trip to Germany and spent three days pouring and talking and listening to buyers from across the globe. For many, the experience of tasting qvevri wine was entirely new; for others, the discovery lay in unfamiliar grapes such as Saperavi and Mtsvane.

As a regular visitor to Georgia, I’ve been lucky enough to have tasted a rather wider range of Georgia’s 500 plus grapes than most people have seen outside that country, but my attention at ProWein was caught by the examples of white Tsolikouri and red Otskhanuri Sapere and Aladasturi being poured by the Teliani Valley winery and Khareba Winery. 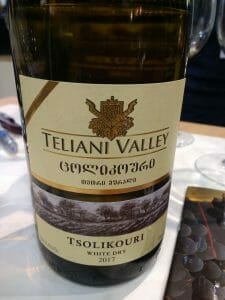 Although it was officially launched in 1997 Teliani Valley winery has roots that actually stretch back over a century and a quarter – and a pivotal place in the history of Georgian wine. The modern operation is, in fact, the successor to a – for its time and place – remarkably innovative winery that was opened in 1887 by Prince Alexander Chavchavadze, a celebrated poet, military general, public benefactor and, ‘father’ both of Georgian romanticism and modern Georgian winemaking.

Chavchavadze was in fact operating under instructions from his friend, Michael Romanov, the Emperor of Russia’s wine-loving brother, who issued a decree for the building of a “150 thousand-bucket winery”. Four years after its opening, Romanov invited a French winemaker called Merle Antoine Mossano to leave his native Bordeaux and introduce modern winemaking techniques and international grape varieties to Georgia. 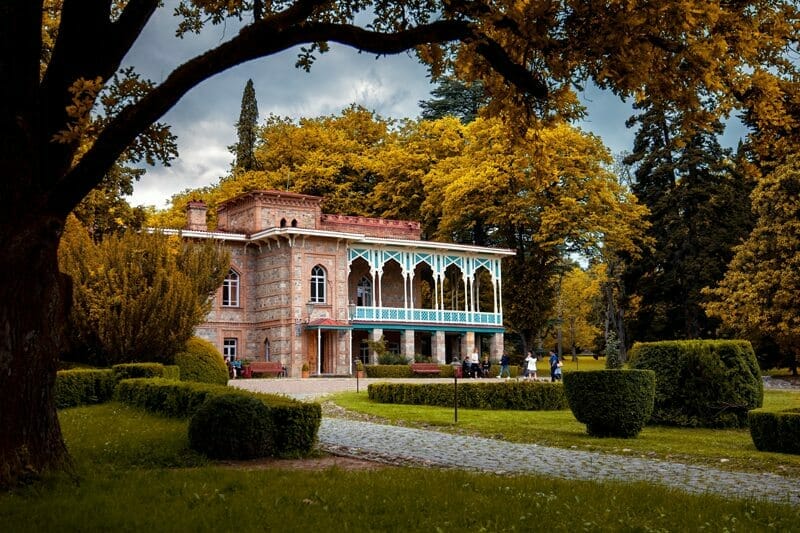 The location chosen for this project was the little village of Tsinandali, in the Georgian vinous heartland region of Kakheti, The soil and microclimate here seemed to offer ideal conditions for the best winemaking, and Mossano, who worked at Tsinandsali for nine years, demonstrated how brilliantly Georgian grapes performed when treated like the varieties of the Médoc and St Emilion – and how similarly well the Cabernet Sauvignon reacted to the soil and climate of Kakheti. Indeed, he famously sent a bottle of this variety to the Emperor in St Petersburg, with a handwritten note saying “Cabernet-Sauvignon, From Telliani Valley 1893, Antoin Mossano”.,

Today, while the media focus on Georgian wine is often almost exclusively on qvevri and Georgian native varieties, Mossano’s contribution cannot be overstated. It can still be seen, for example, in the brilliant examples of wines made from grapes such as the Mtsvane and Kisi using the same methods as in Sancerre, and in such great modern Georgian efforts as Vinoterra’s Qvevri Cabernet Sauvignon.

The Tsinandali winery continued to produce wine during the Soviet era, but there was little investment, and by the time the Iron Curtain came down, it looked decidedly down at heel. But George (Gogi) Dakishvili, a third generation winemaker working there had higher ambitions and in 2007, with friends, he turned the state-owned business into Teliani Valley.

Dakishvili, like Mossano before him, but for different reasons, has played a crucial part in the evolution of Georgian wine. Where Mossano introduced French grapes and techniques, Dakishvili focused his attention on native varieties and on making commercial wine in qvevris which had previously been largely the preserve of families and monasteries. But he also recognized the importance of modern techniques, so in 2000 he added a qualification from the University of California to the winemaking tuition he had received in Ukraine.

In 2004, Dakishvili’s ambitions and US experiences led to a successful application for funding from the European Bank for Reconstruction and Development. Suddenly, Teliani Valley had a world class range of modern equipment, including stainless steel fermentation tanks, crushers and destemmers.

In 2008 Gogi Dakishvili became senior winemaker at Schuchmann Wines, another of Georgia’s top producers of qvevri wines, handing the reins at Teliani to his son Temur who was responsible for the Tsolikouri I mentioned earlier. It is a delicious, crisp, appley-herby, almost savoury white wine produced using modern, stainless steel technology from an indigenous white variety that is also used to make off-dry styles.

Khareba, the winery behind the Otskhanuri Saphere and Aladasturi – and about whom I’ll be writing at greater length in another post – also has a noble history. As long ago as the 17th century, wines from its vineyards in Vachnadzeani in Hereti were championed by the aristocratic Jandieri and the Vachnadze families. The following period, however brought conflict and rule by the Persians, and widespread destruction that included the winery. In 1877, it was rebuilt by descendents of the Jandieris and it was fully modernised after the fall of the Soviet empire. Today, reflecting the the contributions of Merle Antoine Mossano and Gogi Dakishvili, the annual production of three million bottles includes examples of the local Tsitska, Krakhulna, Mtsvane, Khikhvi, Kisi, Tsolikouri, Rkatsiteli, Usakhelouri and Saperavi, as well as the Otskhanuri Saphere and Aladasturi, and some Cabernet Sauvignon and Merlot. Wines, many of which have won awards at top competitions, are made in qvevri – and using modern techniques. 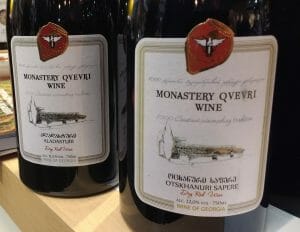 To describe the Otskhanuri Sapere as one of Georgia’s ancient but under-exploited varieties is something of an understatement. As recently as 2004, it was estimated that there were only five hectares in commercial production. Today, it is still a rarity, but it is enjoying a renaissance thanks to wineries like Teliani Valley and Lagvinari which makes an organic qvevri example. The flavour is at once brambly, strawerryish and slightly earthy, with the rich texture associated with lees contact in qvevris. It may not be to everyone’s taste, but it’s decidedly interesting and would be great with game dishes.

The Aladasturi is quite different. It’s name may not appear on many labels today, but in the days before Phylloxera, it was one of Georgia’s most popular varieties, often trained to grow up trees, and used to provide eating grapes as well as make dry and off dry rosé and red wines. Several producers now make single-varietal versions, often in qvevri; the Teliani Valley example I tasted had an unashamedly brightly acidic, wild berry character that I understand to be typical, but there was richness to support it. Again, this is a wine that definitely needs quite powerfully-flavoured foods, but I could see it doing very well with pork or lamb.

And that’s the beauty of wine in general, and Georgian wine in particular: the unexpected flavours and stories that lie behind the labels.

Robert Joseph – wine producer, commentator and consultant, with clients that currently include the Republics of Georgia and Moldova