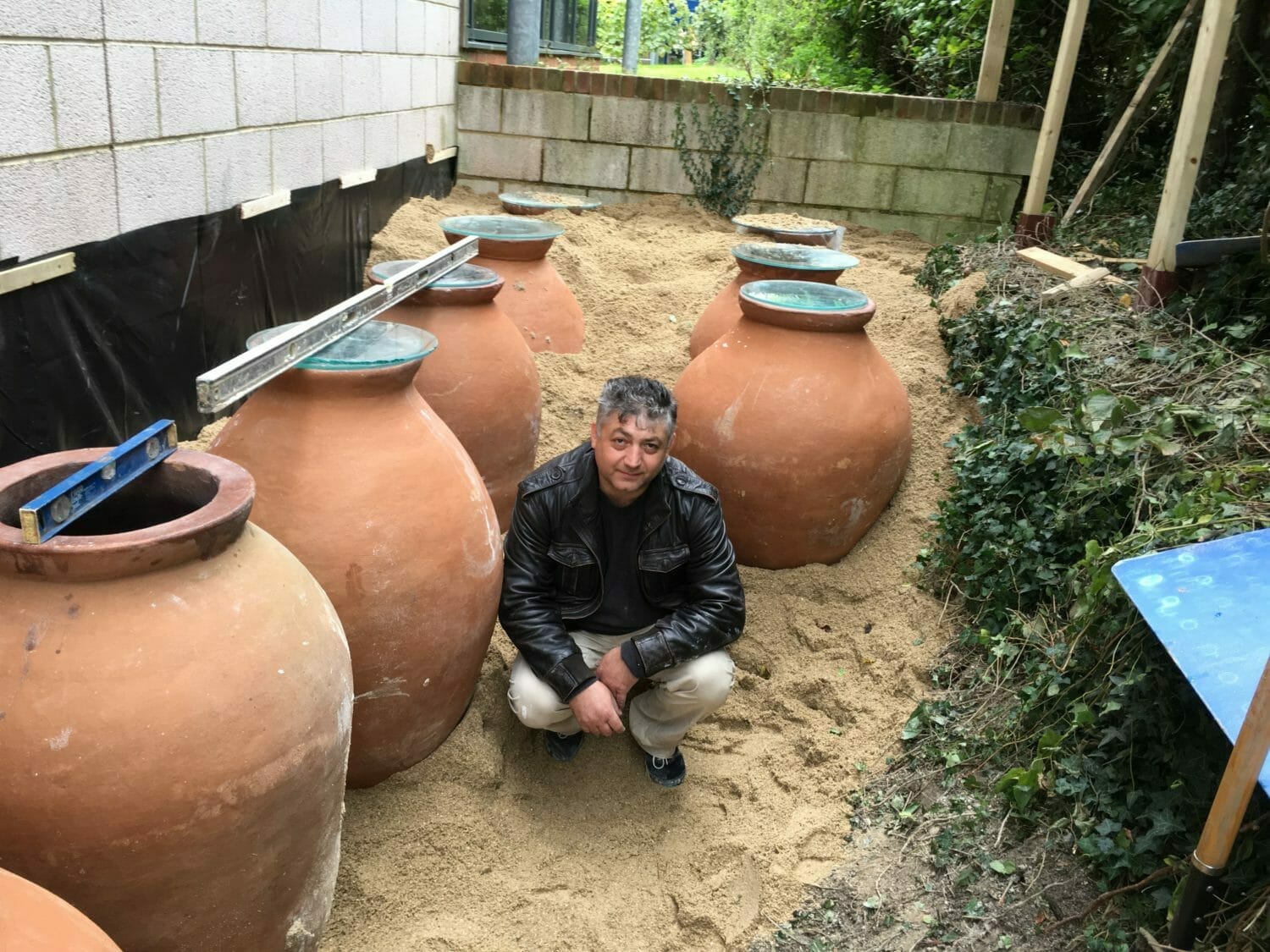 In a quiet corner of Sussex, two cultures have collided. The renowned Plumpton College is playing host to a British first – a cellar or marani of UK-made qvevri wines. Qvevri wines have previously been associated exclusively with Georgia, but the ambition of Henry Mchedlishvili and vision of Chris Foss, recently retired head of the wine department at Plumpton, have made qvevri winemaking a reality in the UK.

In the first of a two-part series, Chris describes how he developed an interest in Georgian wine and culture, and how it encouraged him to become a vocal proponent of Henry’s game-changing project. 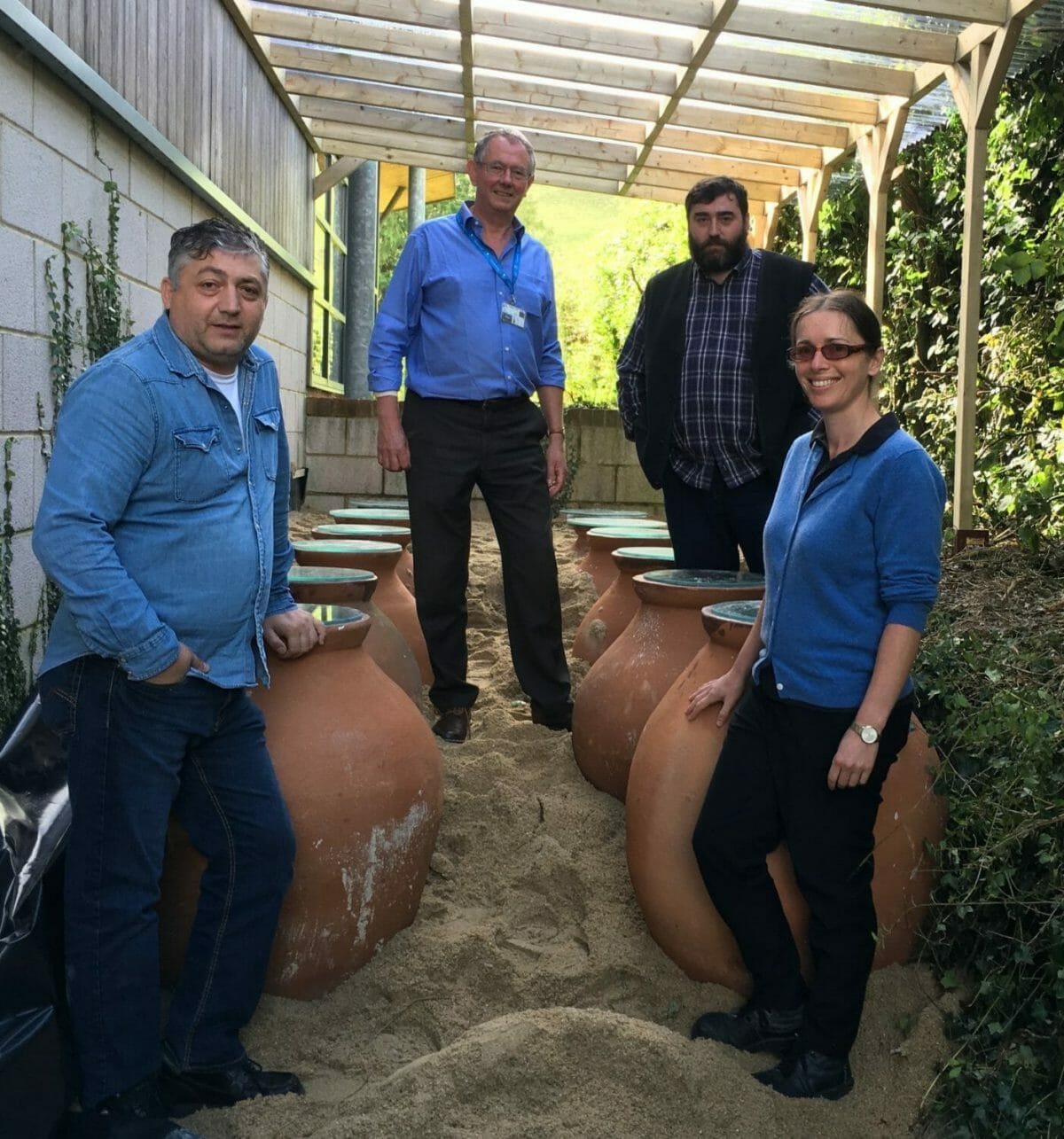 A little bit of Georgia in Sussex (part 1), by Chris Foss

In April 2015, as Manager of Plumpton’s Wine Division, I was delighted to be invited to present on the UK wine industry Georgia, the tiny Eurasian country between Russian and Turkey where wine was invented, eight thousand years ago. It is an enchanting place: historic Tbilisi, picturesque monasteries, unique wines, and openhearted Georgian hospitality. Little did I know that this was just the start to a deep, lasting relationship between Plumpton College and this wonderful country…

Two years later, Mako Abashidze, Director of the British-Georgian Chamber of Commerce, introduced me to her friend Henry Mchedlishvili (if you think their names are complicated, have a look at their script!), founder of Geowine, a Georgian wine importer in the UK. Henry had the idea of making wine in the UK in Georgian qvevri. Qvevri are large earthenware pots, buried in the ground, in which wine is fermented with extended skin contact and minimal intervention. Henry came to visit Plumpton College on the 9th May 2017, looking for a site. I showed him a gap between the Wine Centre building and the farm road where my dog Ruff slept in his kennel when I was teaching. We both agreed: Ruff had to move.

Engaging the help of Master Vintner, Giorgi Barisaschwili, Henry and his team buried twelve qvevris in the space between the winery and the road, and built a temporary shelter above it. It became a sort of ‘marani’, the Georgian term for a qvevri winery. The ultimate aim was to use English grapes, but 2017 was a low-yielding year in the UK, so Henry purchased imported Italian grapes (Tempranillo, Merlot & Sangiovese). The students were intrigued: who were these strange men digging around at the back of the winery? Abbie Hoskin, one of the first students to get involved, said:

“As I was living onsite it was convenient for me to carry out the punchdowns every six hours throughout the fermentations. Having the opportunity to learn ancient winemaking techniques from someone as experienced as Georgi was really valuable and interesting.”

However, it was Sarah Midgley, Plumpton’s Winemaker and Winemaking Instructor, who took the brunt of the Georgian invasion. According to Sarah:

“Making wine with Henry and Georgi was very different to my experience of conventional winemaking, both culturally and technically.  They make wine the same way as it has been done in Georgia for 8000 years, and each important event in the winemaking calendar is marked by celebration!  For the first vintage, we had the hand-made qvevris delivered from Georgia just in time to crush the first fruit into them. The winery was still being built around the grapes being crushed, so we had to cope with lots of sand and building materials. It a was challenging, but interesting experience: I understood the culture a lot better after visiting Georgia and tasting wine from qvevris!”

In true Georgian tradition, the qvevris were sealed after fermentation, and left to settle until the spring. Meanwhile, the British Georgian Chamber of Commerce and the Georgian National Wine Agency invited a group of Plumpton students to visit Georgia at their Easter break.

Stay tuned for the next instalment of Chris Foss’ fascinating account of how qvevri wines came to be made at Plumpton College in Sussex!